One of the more important aspects of getting some speakers of English as a second language to express themselves more clearly in English is rhythm. Every language, including English, has its own rhythm – some languages acquire a very marked rhythm where words are strongly stressed within groups. In most languages the words are organised so that the rhythmic stress falls on the most important words, i.e. the key words expressing the content of what we’re saying.

However, a problem shared by many who do not speak English as a first language is that they are tempted to use the rhythmic stress of their own language when they are expressing themselves in English. Such rhythms may make the English language more comfortable for them when transferring their thoughts into speech. The rhythm can work well when the stress falls on the nouns or keywords. The problem arises when the stress is made on the personal pronouns – ‘his’, ‘her’, ‘their’, ‘its’ or on the definite article ‘the’ or the indefinite articles ‘a’ or ‘an’.

When this happens, the listener has to decipher the key messages in the speech. It can give diverse messages to the listener and these can often be humorous. Everyone likes to laugh, but when you’re at the centre of the joke and the joke is about the way you communicate, it can be hurtful and disruptive to your confidence and progress.

More seriously, the messages you put across can also be damaging. The worst possible message that wrongly applied stress can send during diplomatic business meetings, for example, is: “I don’t really want you to understand what I’m saying, so I’m stressing all the words that aren’t important to distract you from those that are.”

Our Speak English Clearly course was developed over 2 years with the help of an Educational Psychologist. It was tested with 30 different clients who shared 15 different languages. While the structure of the course remains the same as when it was first launched, the Speak English Clearly course has developed along with the changes and influences to spoken English over the last 8 years.

Sad to hear that Fern may have her afternoon television show axed. Her interviewing and presenting skills are really good – better than the other contenders for this spot: Peter Andre, etc.

When you watch and listen to a Fern interview, you know that she’s interested in the person or people she’s interviewing, beyond the notes that have been handed to her by her researchers.

The long term Woman’s Hour presenter on radio 4, Jenny Murray, has the same talent. Although we can’t see her we can hear the real “wanting to know” interest in her voice when she’s interviewing people.

Scott James on Radio 1 has the same skill, as does Dermot o’Leary. Lorraine Kelly on morning TV has it in abundance. This ability to listen with care and gently probe the interviewer without unnerving them is a wonderful gift and makes for really good viewing and listening.

It’s the production team and the programme format that has let Fern down. They’re, out of touch with what viewers want. Who would want to tweet a programme with an action for someone who just happens to be in in Oxford? No wonder Fern’s looking and sounding uncomfortable.

Frances Parkes went to Shanghai in September to train in Voice and Presentation. The course ran over 4 days and incorporated the ‘Speak English Clearly’ programme.

It was a great success with the participants who were involved in the steel industry or commodities. A special thanks to Cheng Hui who did arranged the course and worked on camera.

She will be taking the course back to Shanghai, India and Europe.

Gung-ho William Hague has caused the BBC World Service to axe five of its language services. He says that BBC programmes can be accessed online. Really?

A bit of a struggle to follow a programme when it’s not in your own language and even if your English is good, there’s no comparison to listening to some excellently researched and presented programme in your own language or dialect. The BBC World Service is known for the quality of its unbiased journalism.
We are a small country much smaller than France, why can’t we keep what we’re good at and known for? He’s sending out a poor us voice message to the rest of the world. The money that’s saved by axing the jobs related to the 5 language services will be as nothing to the money lost in this country’s future along with the 30 million listeners.

The reputation of the BBC world service has never been better. Mr Hague is from Yorkshire so what‘s happened to his Yorkshire nowse?

There were whoops and standing ovations at The carol concert in aid of the Rainbow Trust tonight.

The golden glow of the inside of St Paul’s Church in Knightsbridge was the setting for an event that brought in the Christmas season. Well warmed through on mulled wine, apple juice and mince pies, we all packed into the church and were treated to some great music from EL8 and Urban Voices. They sang mine, friends Isabel and Ruby and Fearne Cotton’s favourite “All I want for Christmas” which was better in the raw than Maria Carey’s.

There was an address by Anne Harris, Director of Care at the Rainbow Trust, which was a pleasure to listen to. She told a story of the work at Rainbow Trust with a couple of examples of their work. Lightly and seemingly effortlessly told she engaged us throughout a five minute talk without an autocue, never looking at notes and only once lost the rhythm by going too fast.

Vanessa Feltz read The Twelve Thank You Notes of Christmas from Emily to Edward with such fantastic timing it had us rolling in the aisles. She has such a powerful and clear voice. She’d be great doing stand-up. When I was on my way to the BBC Radio London studio one morning the taxi driver who was driving me spent all his time talking about her and her show.

Sometimes it was a tirade against her sometimes in praise of her cleverness. She harnesses her audience and rides with them. She’s one of the few people who can seamlessly talk for hours, switching from subject to subject without losing vocal energy and without losing her audience. She has wonderful thought to voice clarity. I wonder if she talks out loud when she’s writing?

So Arsenal have won. Well I’m happy but I know a few people who aren’t. Normally I don’t like to work unless I’m on the job so to speak, but I have to say I loved the way Gary Lineker uses his voice and who was the commentator of the match? Was it John Lotts? I thought he was wonderful. A slightly spread ‘s’ which far from marring his commentary, sexed it up. 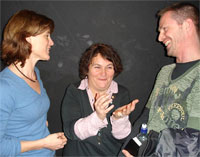 As well as giving courses, we like to attend courses to keep up to date on our training and research methods. Richard Ryder and I went on a course given by Edda Sharpe and Jan Haydn Rowles called “How to do Accents”.

It was fun and great to be on the receiving end of a voice course given by 2 people who really know their stuff. We came away refreshed and buoyed up. It was good to know the see it, hear it, feel approach that we use, is also a technique favoured by them.

This course was aimed at voice coaches who train actors, which we all do at Max Your Voice, but the knowledge crosses over when training people in all jobs.

“Huge payout for woman injured by having to talk loudly in class.”
“Teacher awarded £150,000 for losing her voice.”

These were the headlines when English teacher Joyce Walters quit her job at the Harlington Community School run by Hillingdon Council, after developing vocal cord nodules. She says the nodules were caused by constantly raising her voice and repeating herself over the din from a nearby children’s play area.

I’m currently training 5 teachers in voice and speech. Four of them are funding themselves. All of them attended a voice and speech training course as part of their PGCE but in all cases there were more than 100 on the course and the duration of the course was an afternoon or morning. This is clearly not satisfactory unless it’s followed through with extra coaching.

Everyone’s voice is a unique part of their physical and mental make-up. Small groups or 1-2-1 coaching in voice and speech is the way forward for successful training in long-term voice care. Many schools and colleges have drama teachers on their staff who’ve been trained or could be trained in voice and communication and therefore offer help in the form of advice and training to fellow teachers.

In some of the larger schools I’ve worked in as a voice coach, the only teachers on the staff who’ve not been off work with sore throats and lost voices are the Head Teacher and the Drama Teachers.
Mrs Walters says her employers did not do enough to help her and that she was asked to teach even more students. Failing to send Mrs Taylor to an ENT specialist when she was struggling with her voice is neglecting a duty of care and bad management.

The easiest way to ascertain whether or not there is a problem with a person’s vocal cords is to ask them to say an extended “Ahhhhhhhhhhhhhhhhh”. If there is a break or breaks in the sound, it’s an indication that the vocal cords aren’t adducting or closing and this may be due to the onset or presence of vocal fold nodules. When I’ve referred clients to our ENT specialist because I’ve suspected nodules, the sound that they have produced is usually loud (raised) and forced with over strong bursts of breath.

It’s important, that after the operation to remove nodules, that a period of complete rest of the voice is followed by voice coaching. The voice coaching involves re-education on how the voice works, how to connect to the voice and how to use the voice. This can come a surprise to people who’ve used their voice in a certain way for so long that they don’t realise there is another way of producing sound which is “released” rather than “forced”.

Joyce Taylor is still awaiting assurances from Hillingdon council that something is done to prevent others suffering.

Good for you Immac.  After successfully completing her Law Degree, Immac is currently doing her LPC at the College of Law, which is a step closer to enabling her to qualify as a solicitor.   She is a great role model.  All the best for your future Immac.